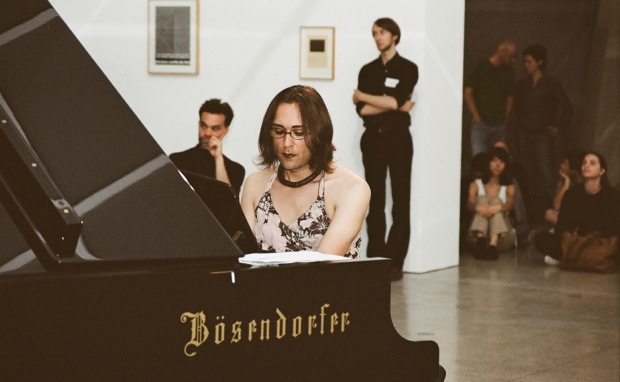 In partnership with Cafe OTO, we offer a rare opportunity to witness a presentation of the more 'serious' side of noted multi-media producer, writer, public speaker, educator, audio remixer, DJ and label owner Terre Thaemlitz.

For this rare performance - an amalgam of lecture, AV performance and audience Q&A - Terre will present the three completed sections of her still in-progress four part audio-visual project 'Soulnessless,' including part I 'Rosary Novena for Gender Transitioning,' part II 'Traffic with the Devil,' and a premiere of the recently completed part IV, 'Two Letters.'

If Thaemlitz' 2003 project "Lovebomb/Ai No Bakudan" can be synopsized as a deconstruction of the "love song," "Soulnessless" is an attempted deconstruction of "soul music." More precisely, a deconstruction of notions of "soul," "meditation," "spirituality" and "religiosity" as fundamental forms of mediation between consumers and audio marketplaces.

Terre's work combines a critical look at identity politics - including gender, sexuality, class, linguistics, ethnicity and race - with an ongoing analysis of the socio-economics of commercial media production. He has released over 15 solo albums, as well as numerous 12-inch singles and video works. Her writings on music and culture have been published internationally in a number of books, academic journals and magazines. As a speaker and educator on issues of non-essentialist Transgenderism and Queerness, Thaemlitz has lectured and participated in panel discussions throughout Europe and Japan. He currently resides in Kawasaki, Japan.

"Transgendered performer, legendary House DJ, artistic intellectual and creator of a number of celebrated classic releases, Thaemlitz is easily amongst the most interesting and bravest of contemporary musicians and for that reason an asset to any artistic movement." Halcyonline - Albert Freeman, on Terre Thaemlitz's performance of "Soulnessless" at Issue Project Room in June 2011.

"We love Terre. In fact, we love Terre so much, that he was the first choice for the ssgs' upcoming party in Tokyo. But aside from his wonderful productions and eclectic DJ sets, we also love Terre for her great mind. In a world where too many producers embody the philosophy that house music is controllable desire you can (and should) own... there is also Terre Thaemlitz." - mnml ssgs