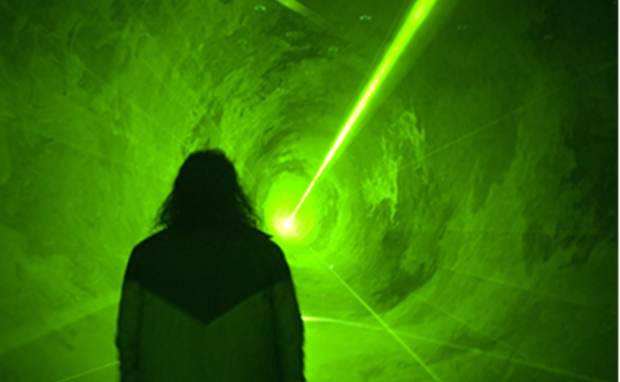 With Synaesthesia we present Robin Fox's laser-light and sound extravaganza alongside a film/sound performance from Sally Golding and Tom James Scott's reimagining of song through the lens of contemporary composition.

Robin Fox is an artist straddling the often artificial divide between audible and visible arts. As an audio-visual performance artist his work has featured in festivals worldwide. Recent appearances include a commissioned performance for the Henie Onstad Kunstcenter, Oslo (March 2010), Mois Multi Festival, Quebec City (Feb 2010), Steirischer Herbst Festival, Graz (Nov 2009), Musica Genera Festival, Warsaw (June 2009) and the Yokohama Triennale (September 2008). His audio visual films for the cathode ray oscilloscope are documented on the DVD release Backscatter (2004) with more recent works Volta and 5 Creation Myths being exhibited as video works at the RoslynOxley9 gallery in Sydney, The Asian Art Biennale in Taipei, the Miniartextil International exhibition in Como Italy and most recently at the Gesellschaft für Kunst und Gestaltung in Bonn as part of Geometric Form seen in Recent Sound. His groundbreaking work with Chunky Move has contributed to the recent piece Mortal Engine winning a Helpmann award for Best Visual Production and an Honorary mention at the illustrious Prix Ars Electronica. He also scored the critically acclaimed work Connected with Oren Ambarchi and has produced two works, RGB and Drift, with groundbreaking new choreographer Antony Hamilton.

Tom James Scott ( London via Barrow-in-Furness) is a composer and performer whose work explores melodic form and song structure. Scott’s first two releases - drawing influence from contemporary composition, traditional music and improvisation – both featured acoustic guitar as the primary voice. While maintaining similar melodic sensibilities and a feeling of hushed expanse, his latest LP sees a shift towards solo piano, with the title, ‘Drape’ (defined in literature documenting past and present dialect native to what is now Cumbria, as, ‘to speak slowly’) setting the pace across the four pieces presented. Previously employing solely acoustic instrumentation, Scott’s recorded work has developed to include a wider range of sound sources and processing techniques, including field recording, electric guitar, and keyboard, with this years ‘Crystal’ LP seeing the more repetitive, long-form compositional ideas prevalent throughout his work pushed to the forefront. Scott is currently also an active member of Liberez, and has released music both solo and collaboratively with the labels Alter, Carnivals, Bo’Weavil Recordings, and Night-People.