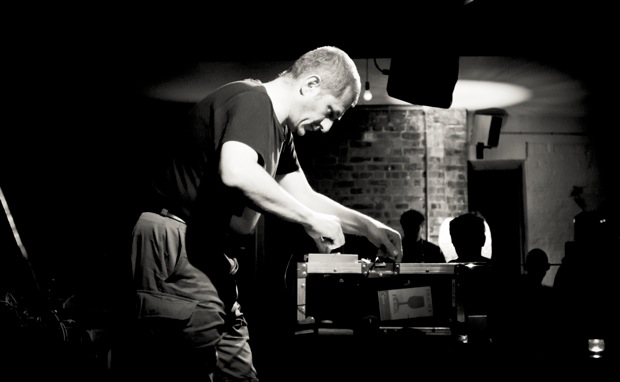 At Kings Place, we present the French sound artist, composer, improviser and director at Metamkine, Jérôme Noetinger. With his Revox B77 tape machine, he developed his signature style of electro-acoustic music where sound is captured and exposed it in it's barest form - 'a vibration of the air'.

Born the 25th of April 1966, Jérôme Noetinger took electroacoustic music courses under the direction of Xavier Garcia from 1986 to 1988 in Fontaine. He is one of the founding members (with the movie makers Christophe Augier and Xavier Quérel) of the ‘Cellule d’Interventio Metamkine’. He has also played with Nachtluft, Voice Crack, Tom Cora, Michel Doneda, Lê Quan Ninh, Martine Altenburger, Emmanuel Petit (within the Cellule) and (alone) with Marc Pichelin, Jean Pallandre, Dominique Répécaud, Peter Hollinger, Keith Rowe (MIMEO).

Antoine Chessex was born in 1980 in Vevey, Switzerland and has a background as a saxophone player and performer. His solo works feature dense layers of sustained pitches reacting with the architecture of the space or massive clouds of amplified sax resulting in intense live actions in total immersion in the sound. As an improviser, he has collaborated with musicians like Lasse Marhaug, Zbigniew Karkowski, Maja Ratkje, Chris Corsano, Ilios, Valerio Tricoli, C. Spencer Yeh, Axel Dörner, Hans Koch, Robin Hayward, Thomas Ankersmit, Lucio Capece, Burkhard Beins and is a founding member of Monno.