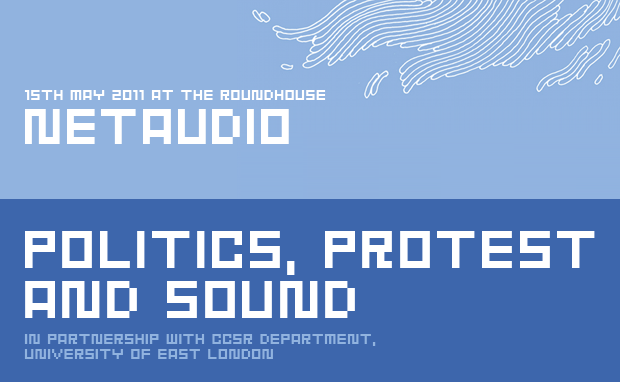 Jeremy Gilbert provides a brief introduction to Sonic Militancy ahead of his talk with Mark Fisher on the Politics, protest and sound panel.

What is it that allows or enables sound to convey or express transformative political sentiment? We can identify at least two clear traditions with quite different approaches to this question. On the one hand, it is often assumed that the political content of a piece of music can only be a function of its association with a set of more clearly legible modes of communication: some lyrics, some text, a title, an image. In particular, the assumption that the politics of music reside in its lyrics remains rather widespread, although the apogee of this assumption probably belongs to the moment of political pop in the 1980s, when intellectual artists like Green Gartside and Pat Kane would produce sweet blue-eyed synth-soul with supposedly socialist lyrics. The evidence that this ever actually had a radicalising effect on anyone remains minimal, and it’s surely significant that today few apart from specialist cultural historians remember their music as anything but Thatcherite pop.

It’s perhaps no surprise then, that they were followed in the 1990s by a generation - which would include myself and Mark - who were mainly motivated by music which didn’t have any lyrics at all, and whose claims to radicalism could often only derive from its formal musical properties, and the ways in which they overturned the very convention of popular music. The unapologetic minimalism of acid house, the raw complexity of jungle, the avant-garde populism of UK garage: although one could occasionally appeal to the social make-up of their crowds (black, gay, or radically mixed) or to the very fact that they mobilised crowds at all (arguably a political gesture in itself, in the era of post-Thatcherite individualism), the only convincing explanation as to why they felt and sounded so dangerous, so cutting-edge, was their sheer level of formal innovation. That said, what united them all, apart from the very darkest elements of jungle, was a certain euphoric utopianism, a sense - carried on from disco, which got it from soul, which got it from gospel - that bringing dancing bodies together in a moment of ecstatic collectivity might at least serve as a reminder of the benign possibilities inherent in social life as such.

In recent years, it’s this utopian openness to the possibilities of the future which has markedly disappeared: instead, Grime and dubstep in their different ways deploy aesthetic strategies which express and intensify the sense of alienation and repetitive futility which advanced neoliberalism can so easily engender in the young. Commentators like Dan Hancox have argued that in the macho rage of tracks like ‘Pow’ can be heard an implicit assertion of collective agency and the potency of rage: especially in their retooling and redeployment in the police kettles of last winter’s student demonstrations. Are these arguments convincing? That’s something for us to talk about.