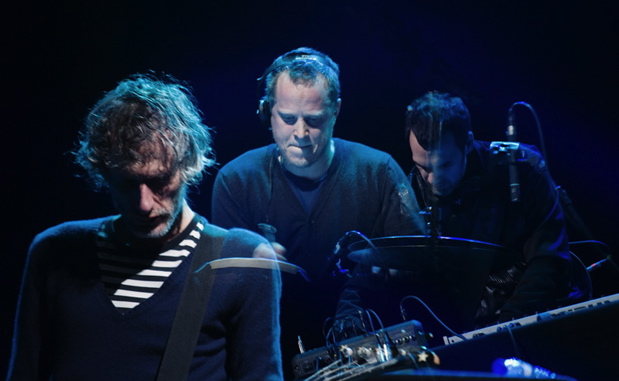 Since the release of Radian’s second album, Rec.Extern (Thrill Jockey, 2002), Vienna's bustling music community has grown to be one of the most vibrant in the world. Radian have taken on a leading role in this scene and are bringing attention to it the same way Sigur Ros brought the spotlight on Reykjavik.

Their new album, Juxtaposition, powerfully crafts melodies out of microtones. Radian carefully considered the placement of these delicate sounds not only to construct lacey melodies and deep grooves, but to do so while alternatively contrasting and complimenting the surrounding sounds.

Radian's last album, Rec.Extern, was met with tremendous excitement from critics and fans alike. Radian's tour included performances at the Pompidou Center in Paris and at the Neu Center for Austrian Art in New York City. The band's members have also kept quite busy between tours as Martin Brandlmayr, Stefan Nemeth and John Norman are all involved with a number of other musical projects.

Trapist, a trio featuring Radian's Brandlmayr as well as guitarist Martin Siewert and bassist Joe Williamson, recently released their second album,Ballroom, to critical acclaim. In addition Brandlmayr has collaborated with the likes of John Butcher, Axel Dorner, Christian Fennesz, Sachiko M, Ottomo Yoshihide, and many others. He was named the 2002 Artist in Residence in Podewil, Berlin.

Stefan Nemeth's label, Mosz, has released music by Martin Siewert and the Kapital Band 1, and has upcoming recordings from Pan American and Fennesz.

John Norman plays in several groups and works at a venue at the heart of the music scene in Vienna called The Rhiz.

"Radian mics the microcosmos of sonic detail, filtering it into a spray of white noise that's thin as foil and dense as chain mail." - Philip Sherburne, XLR8R