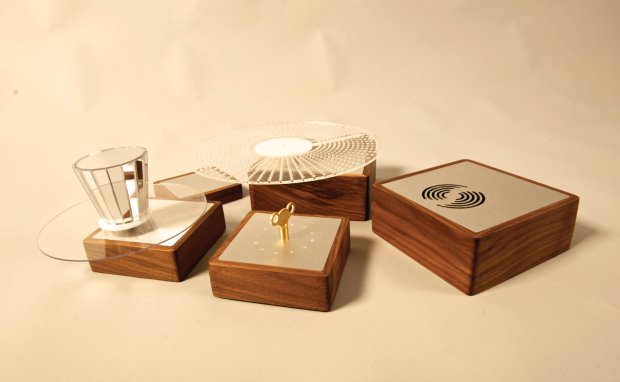 Monomatic is a collaboration, experimental playground and halfway house between the work of Nick Rothwell and Lewis Sykes - exploring sound and interaction through physical works that investigate rich and sonorous musical traditions such as PEAL: A Virtual Campanile – an installation which models the layout and operation of a traditional church bell tower - commissioned by Sound and Music and exhibited at the Leeds City Museum for Expo 09 and at Kinetica Art Fair ’10.

Nick Rothwell is a composer, performer, software architect, programmer and sound designer. He has built performance systems for projects with Ballett Frankfurt, Vienna Volksoper and Braunarts, and has worked at STEIM (Amsterdam), CAMAC (Paris) and ZKM (Karlsruhe). He has composed soundtracks for choreographers Aydin Teker (Istanbul) and Richard Siegal (Laban Centre), and has performed with Laurie Booth (Dance Umbrella, New Territories), and at the Different Skies Festival (Arcosanti, Arizona), the ICA, and the Science Museum’s Dana Centre.

Recent projects include performance systems for Quartet (with director Margie Medlin), interactive video for Troop at the Southbank (with choreographer Jane Turner), surround sound for the media gallery at The Public, interactive installations for Sonic Arts Network and TECHNE (Istanbul), a planetarium gig in Colorado, and a Portable Choreographic Artefact in collaboration with Ricochet Dance Productions. He is currently working in software for Random Dance (Sadler’s Wells), in sound for body>data>space alongside CIANT (Prague) and Kibla (Slovenia), and in audiovisuals for the current Future of Sound tour.

Lewis Sykes is a musician, interaction designer, digital media producer and curator and qualified Youth & Community Worker specialising in the Arts. A veteran bass player of the underground dub-dance scene of the 90s he performed and recorded with acts such as Emperor Sly, Original Hi-Fi and Radical Dance Faction and was a partner in the respected underground dance label Zip Dog Records.

He refocused and honed his interests in mixed media through an MA in Hypermedia Studies at the University of Westminster in 2000 and continues to refine his fusion of music, visualisation and technology through more recent creative collaborations – such as musician with the progressive audiovisual collective The Sancho Plan.

Lewis is Director of Cybersonica – an annual celebration of music, sound art and technology (now in its ninth year) – and between 2002-2007 was Coordinator of the independent digital arts agency Cybersalon, founding Artists in Residence at the Science Museum’s Dana Centre.